Today we got to sleep out! I guess we needed that because we were all very tired after yesterday night. The only problem was, that when we woke up, it was raining. And it rained all day long.
We had to be at the train station at 11:45 and took the train at 12:13. The train took about 45 minutes to get to Milan and in Milan we took the subway to the centre and we got half an hour of free time before we went to the Brera museum. We came up from the ground in a big mall and outside we saw a big square and the Duomo. We walked across the square and saw a couple of nice cars. So we walked across the square and on the other side was a car show with about 30 Ferraris and some other old MGs, so that’s where we spent our half hour of free time.
After that we walked to the Brera museum and had to do an assignment where we had to rate 4 paintings and pick our favourite picture of the museum.
We then walked back to the mall where we were at first and we were supposed to visit the Duomo and, optionally, climb it to the top. There was one problem though: it was closed…
I didn’t like the fact that it was closed because I’d loved to climb the Duomo and see the view when we were up there. But it did mean that we got more free time in Milan, so that was fine. Most of us spent our free time shopping in Milan, because there were a lot of nice shops there. At 18:15 we had to be at the mall again to take the subway and then the train back to Voghera, where we had pizza together.
After the pizza, most of us were very tired and all returned home to get some sleep, but some went to a bar to play some pool, but I was happy to go home because I was very tired of walking all day in Milan
Gepost door Internationaliseringsteam Stedelijk Gym Leiden op 04:03 Geen opmerkingen:

Saturday Pavia day,
Early, very early, we took the train to Pavia. Our first destination was a church with a really big wall around it. So we were all hanging out in front of the church when suddenly this really cool monk comes up to us saying: “welcome to the church, I will guide you”. We were all stunned about having this really cool monk to guide us. He told about the church, the monks who started the church and had these 5 rules, about why they had to leave when the tourist came and about all the fresco’s. After this visit we went to Pavia the city. Starting with some free time mostly spend in a park. At the university the teachers had giving us the assignment in which we had to visit 4 places point out on a map. Because the different groups had different places they visited I will not tell about all the places. One place where we all hang out after this (or during this =) ) assignment was the central square. By luck we visited Pavia on the day the chocolate fair was held so we had nothing to complain about. At the end we had to head back to the university to group and we went back home for dinner and disco. 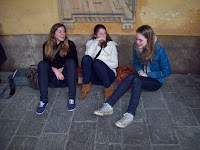 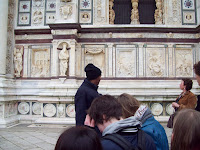 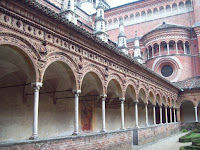 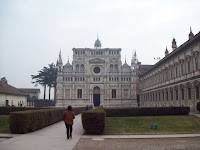 “I woke up this morning with a big smile on my face, because I knew today would be a good day. My first day in Italy!”
At first we ate breakfast at 7 o’clock at our houses. Then we took the car to school. We had high expectations of it because we heard a lot about it. But it looked a little like a prison.
We gathered in the basement for a welcoming speech of the head principal of the school.
Then we were divided in several groups to work on our statement.
first everything had to be written down, what was quite cheesy and not a lot of fun,
so we decided to take a walk through the school to see what it was like.
After that the students had arranged that we could meet the old EEP group, what was a great surprise! Old friendships were picked up again and it was just like in Holland.
After that we had a break. We decided to explore the village; Voghera! It is a picturesque little city, with a market and many coffee places. But it also has great facilities like a big supermarket and a cinema. After that we had a lot of inspiration for our topic; emission rights. And we came up with a lot of arguments. Now we’re just sitting around, hoping the weather will become better, because it has been gray al day long.
We will keep you up to date! 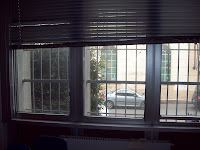 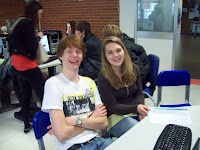 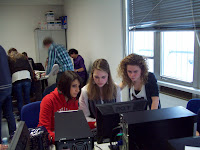 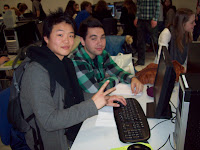 Finally the time had come for us to go to Italy! Around 2 o’clock we took the train to Schiphol and with a little delay we were on the plane to Milan. After a 2 hour drive we were in Voghera and our hosts picked us up. Every still knew each other and I could not imagine a better reunion. I don’t know how it was for the rest of my EEP group but my host was very kind and his parents took me to dinner. We had great pizza and after they showed me a few things in Voghera, like the agricultural school and the piazza of Casteggio.
After I settled in and unpacked my bags we went out to a little café and had a little rendez-vous with a few other members of EEP. We didn’t make it a wild night (yet), since we were still very tired of the trip. But I’ve had a little taste of what an amazing week we are going to have and I can’t wait!

Tomorrow the Dutch students will travel to Voghera. At this moment everybody is packing or finishing the last preparations. We are really looking forward to this 15th anniversary of this wonderful Exchange program which focuses on sustainability and a better future for these students and future students.
Gepost door Internationaliseringsteam Stedelijk Gym Leiden op 14:16 Geen opmerkingen: 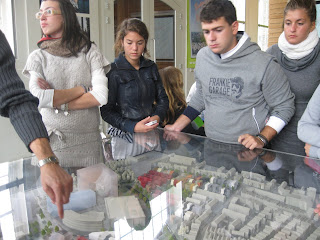 This morning, at 8.45 am, the students met at Socrates to begin a busy day. At first the teacher said what they had to do and then they were divided into four groups. From 9.30am to about 10.15am the students had a speech course in which they had to convince other students of what they were saying, using as many rhetorical tricks as possible. After a small break there was an explanation of the Karl Popper debate and at 11.00am the students had a preparation for the debating match that there will be on Wednesday. In that way they improved their eloquence, trying to speak about dificul and important arguments, like the influence in the social behavior by architectural design and the taxes that the governments should or shouldn’t impose on pollution. In the afternoon Dutch and Italian people went visiting Nieuw Energy (New Energy) and Nieuw Leiden (New Leiden), where they were able to discover some examples of social sustainable building and neighborhoods. At “New Energy” they were able to see the homeless that have a chance to work and that can provide their food. At “New Leiden” the students discovered how the designers projected the new sustainable buildings. Those are examples of the solutions to “get people connected”, so to be social sustainable. The next step was to come back school and to try to design the square near the school and to relate Socrates school with the building and the people with which they would a relationship . After the students presented their projects they was able to come back home and to organize themselves.
Gepost door Internationaliseringsteam Stedelijk Gym Leiden op 23:12 Geen opmerkingen:

Matteo and Merel's story about the first day

Eep day one:
By bike to school at nine, a little bit slow but it went allright. first mrs. roos and mrs. reichart gave us an assignment to do in leiden. Then we had a cycling course, because last year there were some troubles with the italian people and the bikes. Jana and ocke, who participated last year, had made a parcours for us. After the course we went to town to do the poetry assignment. When we came back at school we chose one of the poems and made a poster of it. Then we had lunch with strawberries and mini-cucumbers. After lunch and finishing our posters we had some spare time. We went to the Albert Heijn with a very large part of the group. when everyone bought something to eat and drink we went to a parc and enjoyed ourselves for a few hours.. then everybody went home to prepare the dinner for that evening. for the buffet all of the dutch host brought something like pizza and salads.
At the end of the meeting in the evening the dutch prepared a ppt to introduce themselves to the italians and the italians sang a song for the dutch. To really end up the day everyone told something about their posters and poems. it was a very nice day!
Merel 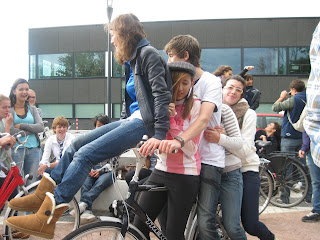 Italian and Dutch students met at 9.30 at school for the presentation of the program of the EEP project. Here, all the guys taking part in the project knew what they were going to do in the morning.
First of all, the Cycling Course: Italian guys just needed a little practice, so they did some useful and fun exercises. The first exercise was a competition between the six teams, just like a race. In the second exercise, two students had to “give each other a five” or throw a little ball while cycling. And the last exercise: how many people can you carry on your bike? That was the most funny exercise of all: you could see even five people on a bike at the same time!
Then, everybody left school for the poetry assignment: there are poems from all over the world written on the walls of the town and the students had to bike and find them. After exploring the city to find the most interesting poem, we came back to the Stedelijk Gymnasium for lunch.
Then, all the guys started the afternoon activity: they chose another poem from a foreign writer and they transformed the poetic language into a drawing that could explain it. Meanwhile, two students, an Italian guy and a Dutch guy, were working on the translation of the poem in their own language.
But the time was over and we had to leave the school. We had some free time in Leiden and the Dutch students showed Italian guys what a beautiful town Leiden is.
Then we met at Stedelijk Gymnasium for a buffet dinner. There was plenty of good food and everybody was very hungry.
After dinner, the day’’s activity was over: each group presented its own poem, by introducing both the two translations and the drawing.
The first whole day in Leiden had just ended, at least for the “school” part of it… 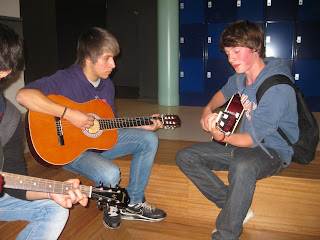